If we imagine ourselves as passengers aboard an aircraft that is flying wildly out-of-control, the following statement will make more sense.

“We have to have policy that is more restrictive and that narrows the path to a soft landing.”

Those were words straight from Jerome Powell’s mouth during the press conference after the Fed raised interest rates by another 0.75% last week. Translation: “A recession is probably coming.”

The Fed has been focused on fighting inflation all year by raising interest rates to reduce demand. So far, it has had very limited effects as job openings remain high and consumers keep spending.

But, changes in interest rates take many months to work their way through the economy. As the Fed continues hiking, it runs the risk of taking rates too high. And the longer we keep the malfunctioning/uncontrollable aircraft in the sky (waiting for that perfect landing), the more likely we are to risk running out of fuel.

Already we are seeing signs that the economy is slowing down: the housing market has come to a virtual standstill and there are increasing reports of layoffs. Just a couple of weeks ago, one of the most accurate recession indicators – the 10 year 3 month interest rate spread – flipped negative, warning of a coming slowdown.

Although dropping out of the sky due to lack of fuel sounds terrifying and we are watching it happen to the market in live time, here at the Intelligent Income Daily we’re not worried.

Keep Calm and Carry On

We are not worried because we’re investing in companies that are well prepared to handle any downturn while continually rewarding shareholders with steady, growing dividends.

We have Captain Sully at the helm, life jackets ready to go, and cargo ships on the way to pick us up. There might be one or two inconvenient gushes of cold air and a little splash of the cold ocean water, but nothing we can’t handle.

Why you ask? Because one group of dividend payers that we encourage people to have in their portfolios is real estate investment trusts (REITs).

Today, I want to share with you some history of how REITs have performed in past recessions and are able to help us survive the crash that seems inevitable up ahead.

While many people think of all REITs as one sector and asset class, the truth is that there are a wide variety of REITs representing almost every market sector. The types of properties that a REIT owns can affect how vulnerable it is to a recession.

For example industrial REITs and office REITs saw some of the biggest drops in demand during the Great Recession in 2008 with average occupancy rates falling by 4-5%. That makes sense, as businesses don’t need as much space when the economy is pulling back.

Retail REITs were a mixed bag, averaging a 3% decline in occupancy. But there’s more to the story. Malls were feeling the pain as consumer discretionary spending dried up, while net lease REITs which owned grocery and dollar stores were just fine.

Apartment REITs sailed through the crisis as if nothing had happened, with occupancy rates staying steady. After all, everybody still needs a place to live even when times are tough.

Know What to Look For

But, just because a REIT is recession resistant and doing well operationally doesn’t mean that its share price will stay high. The market can be quite irrational sometimes. Take Essex Property Trust (ESS) for example.

Throughout the 2008 recession, this apartment REIT was reporting steady growth in earnings and increasing its dividend every year. But, its share price went down by more than 50% anyway. It was the buying opportunity of a lifetime for anyone who was paying attention to what the company was doing and not panicking because of the market selloff. 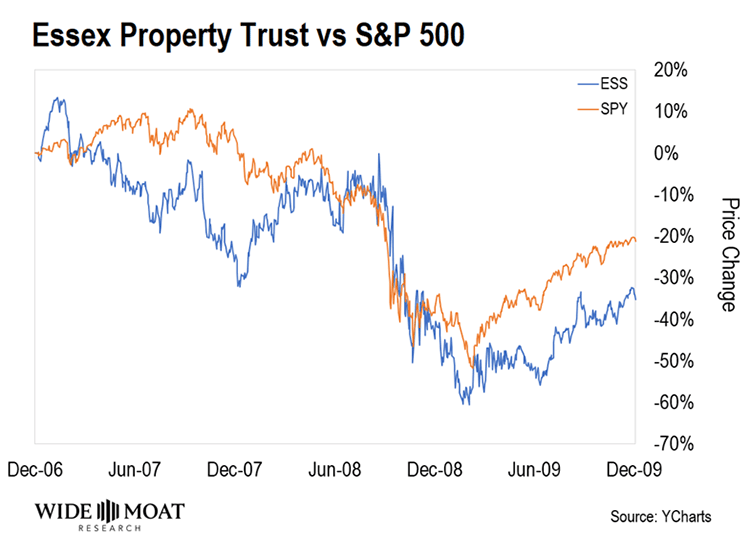 Even though Essex Property Trust fell more than the S&P 500 during the Financial Crisis and was initially slower to recover, it would end up handily beating the market over the next decade. 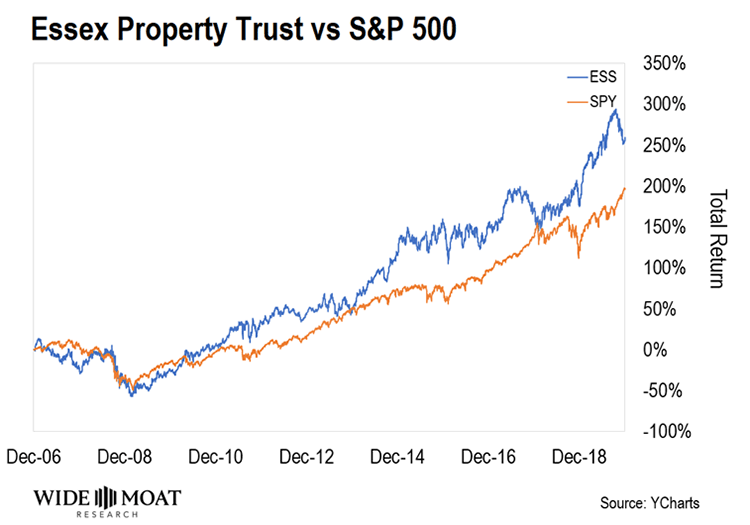 And this is something that all investors need to keep in mind. REITs are not short-term investments. These are 10+ year investments. You may see share prices drop like ESS down to 50%, but market negative sentimentality will only last so long.

If a company has a great management team, is increasing their dividend payout every year, and is on our SWAN (sleep well at night) list, the market’s perception of its share price does not matter. It will surge back up again, and your portfolio with thank you for not emotionally ending the relationship prematurely.

Let me say it again, for long term REIT investors, the share price is NOT the most important metric to determine if a REIT is performing well.

As we head toward another potential recession, it’s more important than ever to understand how sensitive your investments are to changes in the economy. And, if the market selloff continues, pay more attention to the fundamentals and income you’re getting rather than the crazy share prices.

For more in depth analysis of the best recession resistant dividend paying companies, check out the Intelligent Income Investor. I help walk you through which SWAN stocks to buy, and how to protect your portfolio.

Look out for my Intelligent Income Daily article tomorrow, where I’ll show you how dividend blue chip companies have performed in past recessions.