Financial experts and analysts are coming around to something we’ve been warning you about for weeks: A recession is all but inevitable.

Over this weekend, the Wall Street Journal published an article titled “Economists Now Expect a Recession, Job Losses by Next Year.”

And the Journal isn’t alone…

More and more economists are starting to worry that the Fed might “hike [interest rates] until the economy breaks,” as Bloomberg put it.

Now, your first instinct might be to fret or even panic. But let me tell you why even if we do go into a recession, you can still sleep well at night.

At Intelligent Income Daily, we’re constantly on the lookout for ways to protect your wealth – and grow it. And the best way we know to fight economic threats like recession, inflation, bear markets, and anything else that comes our way is by boosting our income streams.

Today, I’ll share insights from one of my top analysts, Adam Galas, to help show you why a recession doesn’t have to be your enemy… if you approach it the right way. And I’ll share my plan to help you continue earning income through it all.

The Fed Seems Bent on Causing a Recession

The Federal Reserve, which has raised interest rates by 75 basis points three times in a row, shows no signs of stopping.

If anything, it’s been increasingly adamant it’ll “finish the job” and bring inflation back to 2%. Over the last few weeks, Fed speakers are have been pounding the table almost daily about how:

Not since Paul Volker hiked rates to 20% in 1981 has the Federal Reserve been so militant about rate hikes and the evils of inflation. It’s clear that, at least for now, the Fed has a sole mandate to beat inflation and doesn’t care about anything else.

But there’s a good reason for this. Unemployment hurts those who are unemployed. Inflation hurts everyone, including workers, who have now faced 18 consecutive months of negative inflation-adjusted income growth.

More and more economists are starting to worry that the Fed will hike us into recession, since that’s historically been the cause of most recessions since 1950.

So even the Fed doesn’t seem to be denying the fact that we’ll hit a recession anymore.

But believe it or not, a mild 2023 Fed-induced recession doesn’t have to be a death sentence for your portfolio.

After a Recession… There’s a Ray of Sunshine

The word “recession” might be terrifying for anyone new to investing.

Yes, recessions are brutal for millions of Americans, who lose their jobs and struggle to make ends meet. It’s no picnic for investors, either, with the average recessionary bear market taking a 34% decline.

But here’s the thing… There’s actually reason to be thankful for a mild recession.

Here’s some more context from Adam:

In the 1970s, the Fed wavered on fighting inflation, not wanting to hurt the economy or raise unemployment. In fact, it “pivoted” early several times. Here’s the result:

If the Fed doesn’t finish the job right now, then the pivot the market so badly craves today could become the fuel for a “lost decade.” That’ll crush the retirement dreams of anyone with a pension or stock portfolio.

So a little pain right now is much better than years of pain ahead. And I can say this because of what’s happened in the markets after previous big declines… 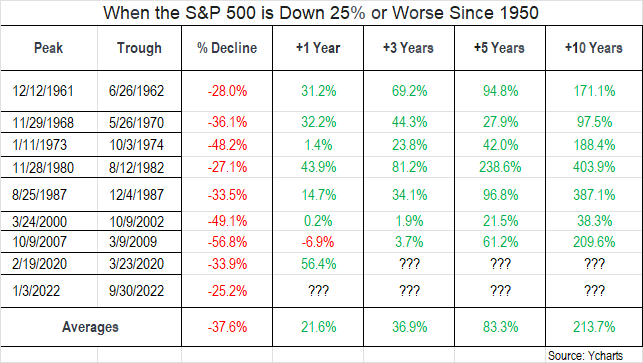 So just because we hit a recession, that doesn’t mean your portfolio will get wiped out. By holding the strongest companies through this period, you can come out on the other side with solid returns over the following years.

And if you focus on income-paying investments, even better. Because you’ll do even better than the performance of the broader market.

But does this mean there’s nothing smart long-term investors can do for the next few months? Do we just have to accept the market will be horrible, and there’s no place to hide?

Actually, there are ways to generate incredible income and even positive returns in bear markets. And if you want to use this opportunity to find what they are, I have good news for you…

On Wednesday, October 19, at 8 p.m. ET, I’m going to share one of my favorite strategies to do just that. It targets the best income-paying investments and helps you collect payouts from them, regardless of bear markets, volatility, or recessions.

Plus, when you sign up for VIP status (for free), you’ll get my brand-new special report “My No. 1 Recession-Proof Investment” to help you prepare for what’s coming ahead.

A recession doesn’t have to strike fear into your heart and force you to cancel your retirement dreams. By preparing today, you can survive – and thrive – in any market conditions.

So sign up to join me this Wednesday to learn all about it.