Nobody knew the catastrophe we were headed toward…

No one thought for a second that in mere months, most businesses around the world would shut down – including malls, America’s shopping meccas.

I certainly didn’t. But I still knew a sucker yield when I saw one.

I’ll tell you more about those in a moment. First though, let me tell you about Macerich (MAC).

Not just because it operated 47 malls… but because those 47 were well-built, well-kept, and located in well-populated areas.

Under the surface, though, I knew it was struggling. The major red flag I saw was its 10%-plus dividend yield.

Dividend yield represents how much a company’s dividend compares to its stock price. The higher that is, the more value you’ll get for your investment…

At least in theory.

Too many people saw that 10% yield and jumped on it. But I knew better.

I’d done the research. And I could see the money Macerich was bringing in just couldn’t keep up with the payouts it had promised.

That’s why I told my readers to get out of Macerich and stay out.

Sure enough, once COVID hit the markets, it shook out the weakness in Macerich.

On March 16, 2020, the company slashed its quarterly dividend by a third, down to $0.50. The stock dove on the news. And despite the economy opening back up, it’s never really recovered since. 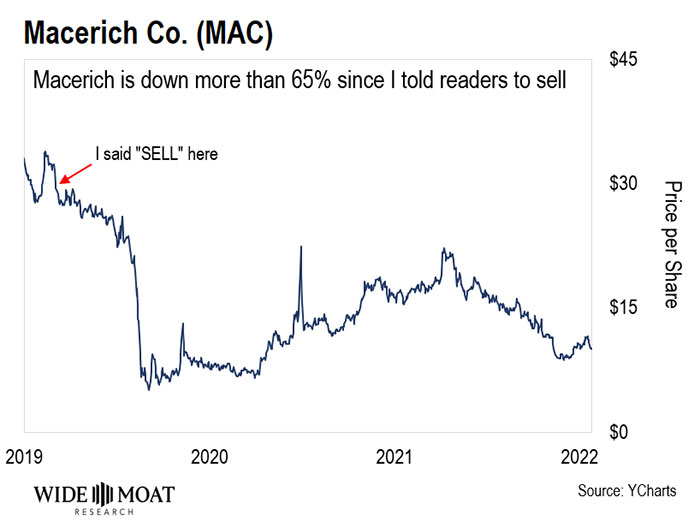 Here at Intelligent Income Daily, we focus on the best income opportunities out there. My team and I use our decades of real estate and stock market experience to do real research and separate the safe ones from the hidden traps.

And while we generally love dividend-paying stocks… We’ve found that investors often put their money in companies with dividends that are too good to be true – stocks that yield 8%, 9%, 10%, or more.

While there are exceptions to the rule, very high yields – such as 10% – are usually sucker yields. And sucker yields never work out.

Today, I’ll tell you exactly what sucker yields are… and show you what to look for to avoid these dividend investment traps.

Why Buying Sucker Yields Is a Mistake

When I say sucker yields never work out, here’s what I mean…

Oftentimes, high-flying dividend figures are so showy because the market has no faith in the stocks behind them.

They’re not high because the companies can afford to pay out so much of their profits; their share prices have simply been driven down, making their dividends look more impressive than they are in comparison.

But more often than not, this isn’t sustainable. So, companies with sucker yields end up cutting their dividends.

Another example of sucker yields in action is CenturyTel. You may know it as CenturyLink, or by its new name, Lumen Technologies (LUMN).

In late 2008, after merging with Embarq, the telecom company increased its dividend by more than 1,000%. As a result, its yield shot up to around 9%.

But then it made some poor business mistakes.

Instead of investing in the future through fiber-based networks, CenturyLink kept acquiring old landlines… And racked up a lot of debt in the process.

Naturally, as customers upgraded to better services, CenturyLink made less and less money. Before long, it couldn’t afford to pay its remaining shareholders what it promised.

Most investors who bought into CenturyLink’s sucker yield would still be underwater today – even with years of dividend payments.

At Wide Moat Research, making income isn’t enough for us. We want reliable, consistent, growing income. And far from being reliable, sucker yields can end up losing you money over the long term.

So, before you buy another dividend payer, here are four signs of sucker yields you should look out for:

When you see any one of those signs, proceed with caution. And when you see them all… run. That’s a guaranteed sucker yield.

Don’t Be the Sucker

There’s a well-known saying: If you’re playing poker and you can’t tell who the sucker is, it’s you.

The same thing applies to dividend investing. If you can’t see the growth of a company but the promise of a high yield is still there… that’s a trap you want to avoid.

Now that you know the signs to look out for to avoid sucker yields, you’re better off than most dividend investors out there.

And over the coming days, I’ll share examples of healthy, safe income plays to help you reliably and consistently build your wealth over time. So stay tuned.