As I told you all the other day, I have five children: four daughters and one son. Nick is my middle-child, 20 years old, and a whole lot like his dad.

In some ways, that’s a good thing.

In others, not so much. One saga that’s played out over the last two years definitely falls into this latter category.

But before I give you all the gory details, let me explain my first big money blunder when I was 18…

Way back when (let’s not say exactly how long ago), there was a place called the Pavilion I used to go to. Located in Myrtle Beach, South Carolina, it featured an arcade that included some real gambling games.

Flush with $100 from high school graduation gifts, I headed straight for the Pavilion… where I came so close to turning that cash into $1,000.

Just not close enough, since I lost it all.

So I did what any other red-blooded teenaged male would do. I went to my aunt who lived close by, reminded her I’d just graduated, and happily accepted another $100 she gave me as a gift.

Then I went right back to the Pavilion, tried out that same stupid game… and lost it all over again.

Fortunately, I’ve learned a lot since then (though not without a few more pitfalls, I’ll admit). That’s why I strive so hard here at Intelligent Income Daily.

We research the safest income-producing investments to make sure you don’t have to take risks with your hard-earned money to reach financial freedom.

My team and I want you to avoid making the same mistakes we have. That way, you won’t have stories of your own like the one I’m going to share with you today.

Now back to my son, Nick…

During the 2020 shutdowns, everyone coped the way they could. For Nick, that meant online gaming.

(See where this is going?)

He and his friends even recorded the momentous occasion as it happened. Click the image below to watch it.

Being the responsible, caring, and experienced father that I am, I immediately sat him down.

Yes, he was an adult, I acknowledged, but this was significant money that could help him sleep well at night for decades to come.

If he only used it well.

I told him to put 40% into dividend-paying stocks like the kind I recommend. I’d accept another 20% if he wanted to buy my old BMW (which he did). And then he could do whatever he saw fit with the other 40%.

As it turned out, that was investing tens of thousands of dollars into cryptocurrencies… Which didn’t turn out well for Nick.

In fact, he lost all of it. And then, to make matters worse, he doubled down.

Just like his old man, he thought it was just a fluke. In his mind, other people might not be able to, but he could win it all back and then some… If he just cashed out of his dividend-paying stocks and invested that money into crypto instead.

That’s how he lost the other 40% of his winnings, leaving him with nothing but a car.

That he now has to service.

With no money left.

How He Would’ve “Won” With Dividend Stocks

So has Nick learned his lesson?

I’m afraid the answer is that he resembles me in more ways than one. Because it took a few more hard knocks before I wised up, too.

When I asked him what he would do if he could go back in time and do things differently, his answer wasn’t that he’d invest everything in dividend-paying stocks.

Yet if he had, he’d be in a much more solid financial place today.

Take Realty Income (O), my favorite stock. It’s a real estate investment trust (REIT) that invests in corporate properties in the U.S., U.K, and Spain. And its dividend yield is a healthy 4.3%.

Of course, I advised Nick buy into it. From the day he cashed out his winnings, its stock price is just about the same. So he wouldn’t be sitting on losses in a volatile market, for one.

But it’s returned around 25% in the time in between.

And VICI Properties (VICI) – a gaming REIT that rents space to enormous casino names like Caesars (CZR) and MGM (MGM) – has returned over 29%. That’s another stock I really like that pays a yield around 4.3%, and one I thought would appeal to my game-playing son.

Plus, compared to the S&P 500 benchmark, both are doing markedly better. Just check out the chart below: 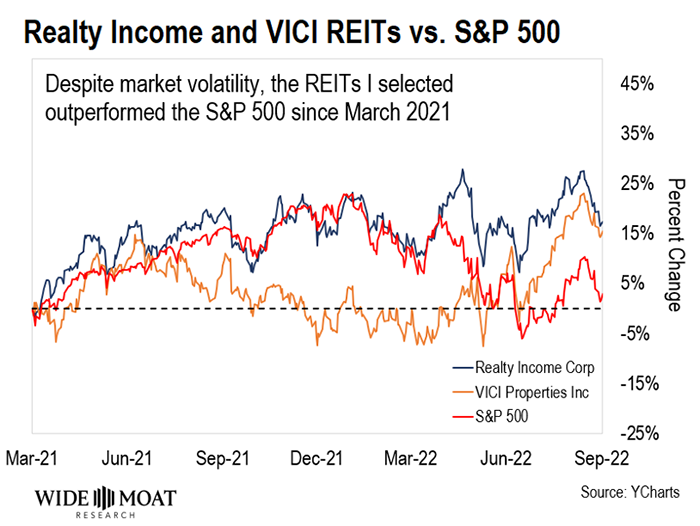 As for the cryptocurrency market Nick favored instead? In the same time frame, Bitcoin is down 59%… And some of the other top 10 cryptos like XRP and BNB are down 25% and 55%, respectively.

Investing in something that volatile is almost never a good idea if you’re looking for a reliable income stream.

Now that I’m older and wiser, I’m all about sleeping well at night. My hope is that Nick will reach that conclusion himself.

And my hope is you won’t repeat the mistakes he and I made… and can choose investments that provide income streams that last.